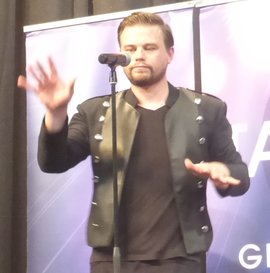 Gavin made his name wearing 'That Red Jacket' as entertainment staff, before joining a lookalike agency as Leonardo DiCaprio.

On joining the Take@That line-up playing the role of Jason, Gavin immediately tackled the challenge of mixing some of Take That’s trademark moves with his own style to create the dance routines that are so fundamental to making the Take@That experience what it is.