June 2020
We enjoyed getting together on 12th June for our virtual gig on Facebook Live. We are pleased to have helped Alex's Wish raise over £400. Our Jason Orange (Gavin) even shaved off his lockdown beard live on stage to raise more money!

Alex’s Wish is a charity set-up to eradicate Duchenne Muscular Dystrophy, an aggressive form of Muscular Dystrophy that affects 1 in every 3,500 boys born. Every single muscle is destroyed due to a lack of protein.  It also affects the heart and lungs as these are muscles too.
Alex’s Wish was set-up by Emma and Andy Hallam (parents to Alex) in late 2012 to help raise vital funds to help bring about new treatments and ultimately a cure for this devastating condition.

Thanks for everyone's photos and comments and we hope you enjoyed it as much as we did. It was great to see you all joining in at home. We hope to see you all for a live gig soon! Highlights can be seen here:
https://www.facebook.com/alexswishcharity1/videos/2345603119077705/

Thank you from amber

January 2020
We are very pleased to have reached our target of £800 which has enabled Amy and Friends to purchase iPads for both Tom and Amber. Thank you so much to everyone who donated!

An Ipad for Amber

Reach Out For Tom

3rd October 2019
Unfortunately the Leicester marathon and half marathon which were due to take place this Sunday (6th October) have been cancelled due to flooding on the course.
Whilst we are disappointed that we can't run this weekend as planned, we can't let all our wonderful sponsors down so we have come up with a plan B! Dean, Gavin and Catherine are hoping to run the Rugby half marathon instead on 27th October. Ben is unavailable due to work commitments and Mark has a long term football injury.

We have smashed our fundraising target of £2000 but this gives us an extra 3 weeks to raise as much money as possible for Jaxon!

Members of the Rugby Methodist Church Centre kindly donated £130.
The Ben Corfield Football Fund donated an amazing £300.
Stand up bingo at two recent gigs has raised £220.
​Our raffle at The Elms gig in July raised a fantastic £240.
We held an auction of a Take That VIP lanyard which was won at £40 by fan Janet who very generously donated £50 to the pot.
Our sax player Catherine did some freelance work for a local band who donated £30 to the charity.
Another fan, Natasha, held an auction for a Gary Barlow Specsavers poster and raised a brilliant £100.
​
We have all been training hard for the half marathon! If you would like to make a donation to help us raise even more for Jaxon then please click here.
See this page for more information about Jaxon, the little boy we are running the half marathon for and why he needs our help.

Jaymi joins us on stage

2nd year running at festival on the pitch

Fundraiser of the Year!

leicester half marathon- WE DID IT!

another sell-out at the elms 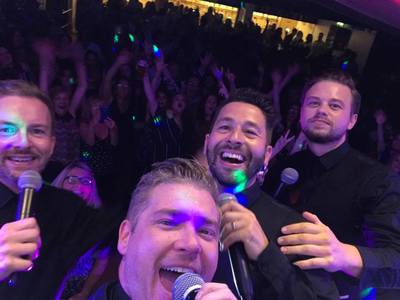 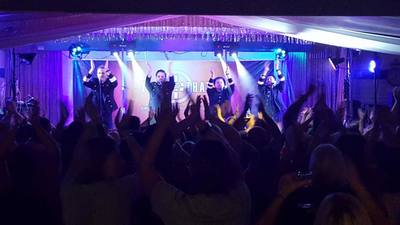 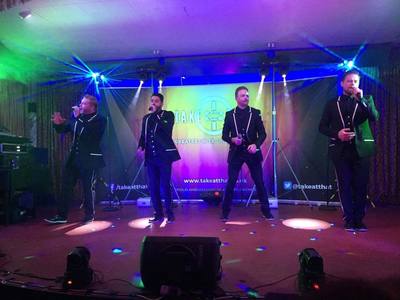 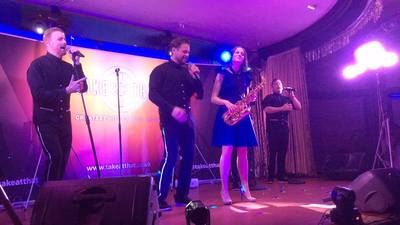 A big thank you to everyone who attended our annual gig at The Elms last night- our 6th appearance in 5 years. Another sell out and arguably the best yet! Special thanks to people who travelled from Scotland, Staffs, West Mids etc.
We really appreciate everyone's support and don't take it for granted. We have been lucky enough to perform at some amazing venues this year but we always consider this to be our home venue. It's always special to perform for all our families and friends.
Thanks to Dave Mazzei for the support set and Catherine's cameo appearance with the sax on A Million Love Songs.
WHO'S COMING NEXT YEAR?! 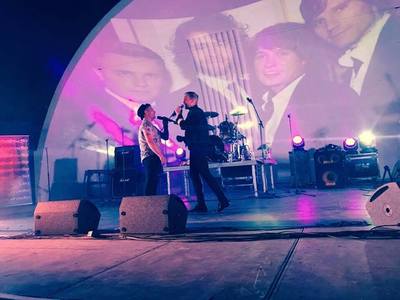 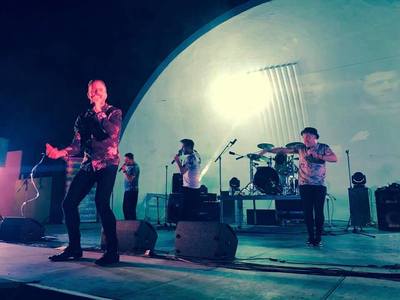 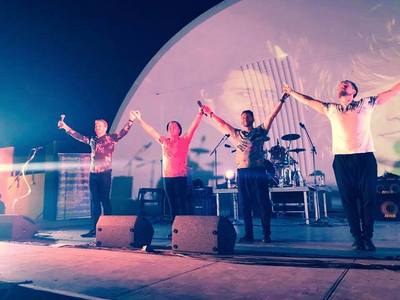 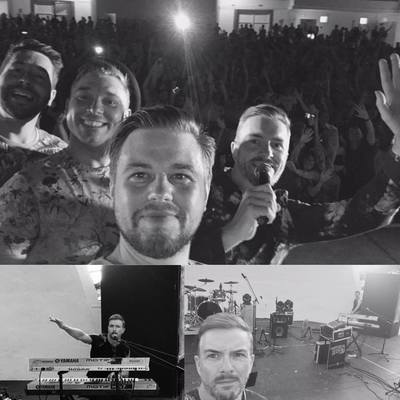 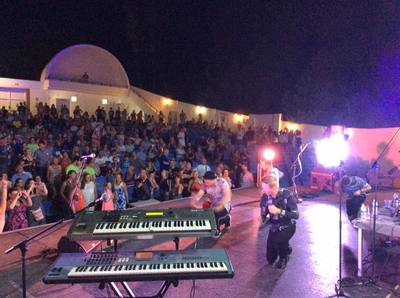 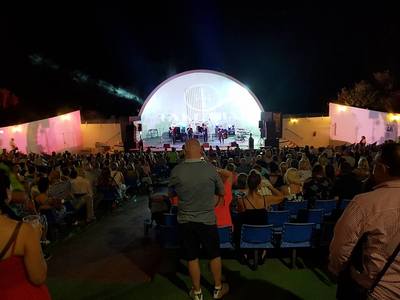 We had a brilliant night at Mijas auditorium in Spain on Saturday night. We were part of the 'Festival of Legends' concert, sharing the stage with top tributes to Bon Jovi and the Bee Gees. Thanks to everyone who attended- a good 700 people were in the audience. A particularly big thank you to all who travelled from the U.K. and holiday makers who bought tickets. We hope you enjoyed it as much as we did! 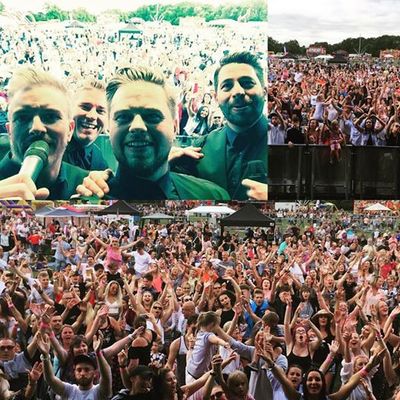 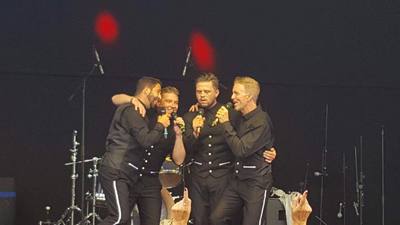 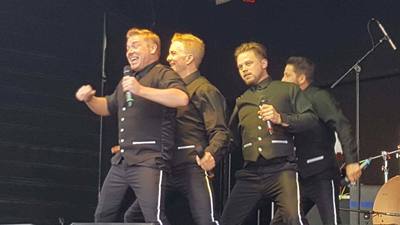 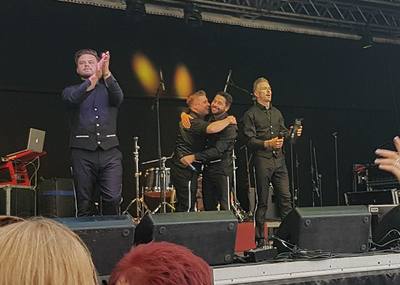 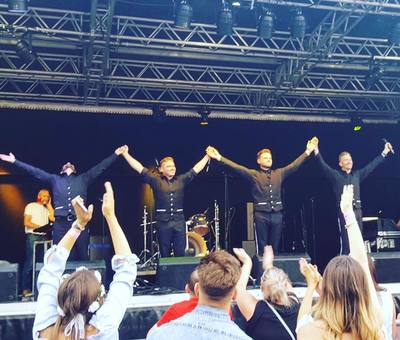 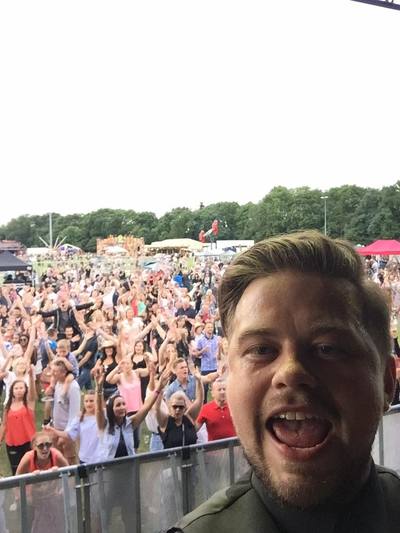 We had a great time at the Festival on the Pitch at Saffron Dynamo FC in Leicester on Saturday. This was the festival's 5th year and we were excited to be part of a line up of brilliant bands including:
The Double Yellers
Shine
80's Revellers
The Little Mix Experience
Coolplay
Johnny & The Goodtime Boys
The Moderators
It was a pleasure to be a part of this 9 hour extravaganza and we hope the 5000+ people who came had an amazing day! 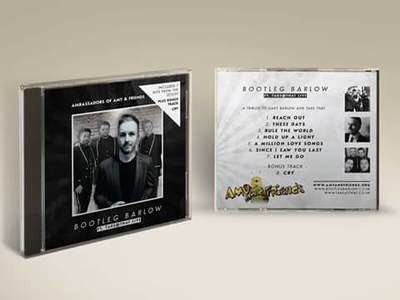 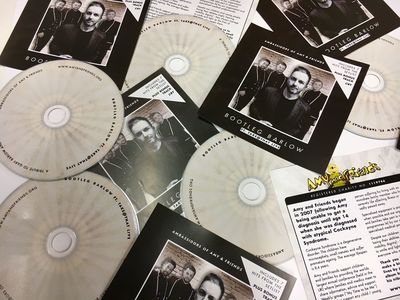 Hot off the press, Take@That's new CD album has now been released featuring recordings of some of Take That and Gary Barlow's most popular hits.
​
Tracklisting:
1. Reach Out
2. These Days
3. Rule The World
4. Hold Up a Light
5. A Million Love Songs
6. Since I Saw You Last
7. Let Me Go
8. Cry (bonus track)

The CDs cost £4 each with all proceeds going to Amy and Friends. They can be purchased at gigs or contact us to order one!

they'll run so hard we'll tear the ground away...

It's official: Take@That will be running the Leicester half marathon in October 2017 in aid of Amy & Friends.

We will be joined by former marathon runner Helen King as our mentor. Helen has run several marathons so we are counting on her to drag us through it. We want to raise as much money as possible to help children with Cockayne Syndrome and their families.
Since 2013 Take@That have performed on many occasions raising money for Amy and Friends and have made several friends along the way.
We have a target of £1000 so please give generously! Help us put a smile on the children's faces.
sponsor us here

ambassadors for amy and friends